At about age four, Santa gave my brother and me trains for Christmas.  They were S-gauge Gilbert American Flyers: bigger than HO scale but smaller than the more popular Lionel, and with two rails instead of Lionel’s three, more realistic.

I distinctly remember my train coursing around the Christmas tree: a Union Pacific switcher followed by a brown box car, a flat car with stakes so that it could hold to-scale sections of pipe, and a little red caboose that my tonally challenged mother sang about.

Within a couple of years, we moved north from the LA suburb of Altadena to a five acre “spread” along a creek in Butte County that included a grove of almond trees.  Lost in that transition were some elements of the American Flyer train set including those replica pipes. 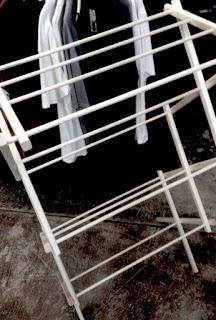 In those days, our little farmhouse’s laundry room contained a Kenmore washer, but for drying things, Mom relied on the old fashioned, tried-and-true, solar powered clothesline out back.  On laundry days when it rained or was foggy, she set up a drying rack back porch.  It was made of half-inch dowels and 1x2s and it opened sort of like an accordion.

But it didn’t rain all that much, so for most of its life, the rack sat on its end collapsed next to the Kenmore.

Just short of the orchard, in a long, narrow structure behind the house, Dad had a shop, a tool shed and a vacant space he converted into a train room for his sons.  A twelve-inch wide shelf skirted the entire interior.  We laid S-gauge track and could spend hours watching our trains chug around the rectangle.  There was one problem, however.

One sunny day, while Mom was off to Harvey’s Market, the neighborhood mom ‘n’ pop, or a PTA meeting or something, I had little else to do with my time but watch my train do its circuit with the flat car rolling around and around naked.  It occurred to a seven-year-old me that some half-inch dowels, cut to the correct length would make a dandy load for that empty freight car.  By this age, I could boost myself up onto Dad’s workbench and grab his prized Disston-Porter hand saw, and the drying rack proved not so cumbersome that I couldn’t haul it out to the shop.

Finally, and by my own hand, my flat car had its freight.

About a week-and-a-half later, it rained on laundry day.

And for a view of some of the freight cars supplied by Gilbert for their American Flyer toy trains check out: http://www.thegilbertgallery.org/Freight%20Gallery/freight_gallery.html 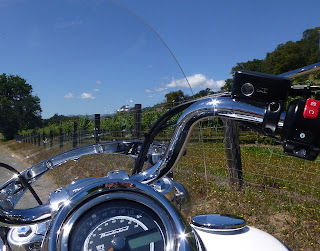 I live in a place where there are no bad roads.  Even the freeway that cuts through town is palatable: north to the redwoods, south toward the bay.  Secondary roads?  A week ago, I ventured to a tiny grove of redwoods – just a dot on the map.  Yesterday, it rained and I rode west to the coast.  Today?  I was running short of the whole bean coffee I grind each morning for my single cup of Joe.

My first experience with a really nice motorcycle involved an ’83 BMW R65.  Perhaps a bit too small for my lanky frame, I enjoyed the occasional commute from one end to the other of Sonora in Tuolumne County for a haircut.  I chose a barbershop that required a good thirty minutes on skinny and entertaining roads for my once-monthly riding delight. Twists. Canyons. Pines. Granite. And then the shears. 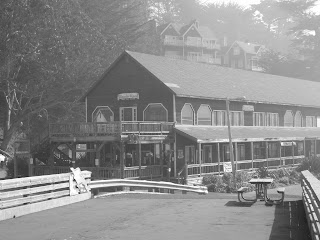 Long ago, it became my practice to shop locally as far from home as possible.  My intent yesterday was to buy coffee, but I ended up taking a route that led me in exactly the opposite direction to a nice little chowder house with a view of a churning sea just off the pier in Point Arena.  Not surprisingly, today, I was still short coffee.  Funny how wanderlust can derail even the simplest of agendas.

Sonoma County, California, it is said, has more soil types than all of France.  Perhaps this is why Sonoma’s main agricultural endeavor seems to be wine grapes.

Travelling along the secondary roads, over ridges and into vales, vineyards appear as rolling waves across the undulating landscape.  Real picturesque.  Generally, we find Pinot Noir and Sauv Blanc to the west, Zins and Cabs in the drier regions east.  But pocketed microclimates married to soil regions borne through the combination of tectonic forces and eons of erosion bear blocks of myriad fruit, each with specific characteristics based upon genetics and locale.  If one likes wine, Sonoma County is heaven.

Likewise, if one likes a range of riding experience, Sonoma County does not disappoint.  Today’s excursion traced the edge of the Alexander Valley, crossed the Mayacamas hills and descended into the northern reaches of a Napa Valley that may not quite deserve the vaunting wine reviews it receives; at least that’s what those of us in Sonoma County believe… 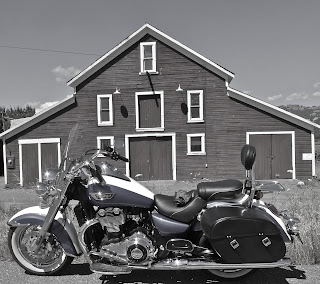 To be sure, there is – or was – more going on in the realm of agriculture in this region than simply viticulture: cattle are grazed, fruit and nut orchards dot the landscape and tiny farms, organic and otherwise, checkerboard the area.  But overall, the acres and acres of grapes, which have displaced perhaps too many of the old time farms, provide a beautiful backdrop for the twisting, rise-and-fall pavement that invites a casual throttle and a relaxed pace.

The ride through northern Sonoma County into neighboring Napa County is a rewarding two-wheeled escapade.  The city of Calistoga is a berg of a few thousand situated at the north end of the Napa Valley.  Though there is an a comprehensive John Deere tractor dealer on the east end of the main drag – bring a grandson or daughter and buy ‘em a green ball cap – the community’s agricultural roots are deeply hidden by a burgeoning tourist trade: mud baths, a quaint downtown, tasting rooms monikered with names famous for stuff other than wine. 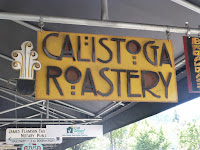 Allow and hour or so to stroll the street.  A great bookstore awaits.  A classic California café, as well.  And the Calistoga Roastery: it offers the whole bean coffee that, they claim, “wakes up Napa County.” 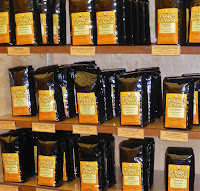 I use this independent business as my excuse to do seventy miles of enchanting pavement.  The roastery sells whole bean and blends whose essence, the day after, reminds me of the pleasantry of the journey – smooth, warm and satisfying.  Plus, at the Calistoga Roastery, a pound of coffee still weighs 16 ounces.

What could be better?

I’ll ask myself this question tomorrow morning over a warm and fragrant cup and conclude: “Not much.”

For the ride and the commerce, I’ll be back in about three weeks, unless I should happen across another roaster while exploring a different thirty-five miles of twists, turns and stunning scenery – somewhere else local.

Notes:  Info on Calistoga may be accessed at: http://visitcalistoga.com/ 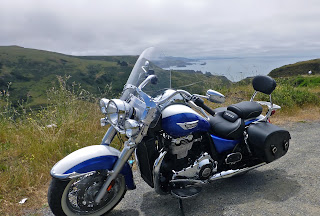 Today:  South on US 101, east on state route 128 at Geyserville to Calistoga.  Left onto the main drag.  Return?  Retrace.

THE SONG MY SAMSUNGS SING