THE GHOST OF EL CAMINO VIEJO

“There’s a gravesite I try to get to every time I come down this way.”  My explorer buddy John pointed at his iPhone and showed me the X labeled “grave” on the displayed topo-map.  “I know it’s out here somewhere.” 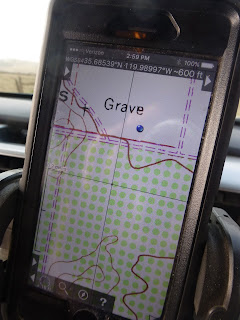 We were trundling over square-cornered dirt roads on the western edge of the San Joaquin Valley.  We squeezed along between the edge of a pistachio orchard and a barbed wire fence on a pair of ruts well suited for his Toyota 4-Runner.  Across the fence, a vast flat, dry surface sloped slightly toward the rise with some prominent sandstone outcrops.  Through an open gate, we followed the road, monitoring our position on his mobile devise.  With a degree of anticipation, we seemed to be moving closer to the X.  Shortly, however, our route curved west-southwest and the grave’s location slipped behind us on the display.

“Always seems to happen this way,” he said, cranking the 4-Runner around.

“Why would there be a grave marked on the map in this desolate edge of Kern County?” I asked.  “I mean, its like we’re in the middle of nowhere.”

In the late 1700s, a most vaunted north-south California route was the King’s Highway – El Camino Real.  It served as the link between the missions and presidios established by the Spaniards who settled California intent on cultivating its fertile coastal valleys and Christianizing those peoples who’d sparsely populated the region for millennia.  Coursing from San Diego to the San Francisco Bay and beyond to Sonoma, the Camino brought commerce and trade to the missions and ranchos and a degree to government oversight and security to the missionaries and ranchers.

Some folks, however, weren’t particularly enamored with all the scrutiny that security brought, and an alternate south/north trail from San Pedro to about present day Oakland provided an attractive alternative: El Camino Viejo.  Travelers followed a path across desolate playas and dry hills to get to where they were going.  Some made it.  Some did not.

Back toward the gate, we spotted a set of ruts splitting off in a northeasterly direction, dropping into and out of an arroyo.  I hopped out of the truck to connoiter a bit.  Parallel to our former route, another set of tracks, nearly covered in sage and cattle poop headed west.  The big Toyota eased across the range toward a rocky outcrop.