The new Klim Latitude Jacket arrived on the perfect January day.  Four or five days of thick, drippy tule fog, and my Seasonal Affective Disorder (SAD) was kicking in.  Enrico, my Yamaha Super Tenere, was probably feeling about the same as me.  We both knew that the cure for SAD was a trip to some high ground somewhere above the fog. 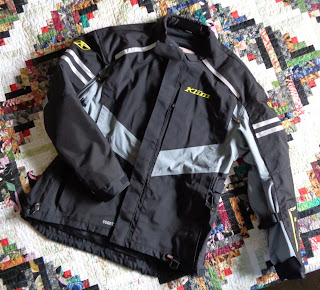 The parcel from RevZilla arrived exactly as scheduled; the contents were just as advertised.  I donned my new Klim Latitude and marched around the house, past the mirror several times, adjusting the jacket to fit my girth and the sleeves to my spindly arms.  (Fifty years ago, pulls-ups in gym were not my friend.)  Given my odd shape, I was curious as to whether the jacket could be snugged just so.  Walking around the house was fine, but the real test would lay inside that blanket of moisture.

Thumbing the starter on the Yamaha through my winter gloves, it was as if Enrico's exhaust note was grumbling, “It’s about time!”

A block away from the house, I felt a draft that I knew was gonna bug me.  But the tabs on the Velcro® closures at both the elbow and the wrist were easy to manipulate even with those clumsy gloves on.

A mile from home, I entered the 101 freeway and headed south at the speed limit.  Moisture collected on the face shield of my Shoei and I fingered it away; but even after twenty minutes at speed through this pea soup, nothing seeped through the Latitude. 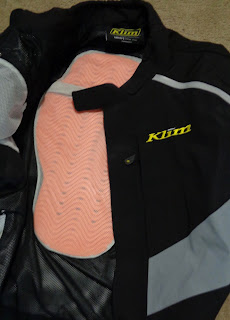 Sunshine, if there were to be any today, would be found near the crest of the Maacama Mountains.  Heading east out of Santa Rosa, a twisty Mark West Springs Road is a delight when dry.  In January its curves can be more challenging when wet, especially considering the erosion caused by the rains that followed the area’s recent devastating fires.  I hoped not to try out the jacket’s impact protection. 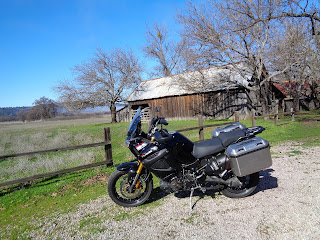 North of Calistoga, I coursed further north on CA 29 as it climbs out of the Napa Valley on a six mile stretch that recalls Stelvio Pass.  Somewhere in that section, I broke through the fog.  The temperature rose from mid-40s to nearly 60.  Not enough to remove a layer or open a vent, but while having coffee at an outdoor table in Middletown, I fiddled with all of the zippers and closures, pleased with so much of the design of this unit.  I’m gonna like this a lot!

Seasonal Affective Disorder be damned!
Posted by Bumpa at 11:36 AM 3 comments: Links to this post

MORNING AT THE DAVENPORT ROADHOUSE AND INN