CONFESSIONS OF A NON-FITNESS GUY (AND HIS BICYCLE)

Eschewing our throw away society…
…sort of

Chatting in person with a Facebook friend over coffee, we lamented those things we used to own, but for some reason, have jettisoned.  Riding home on my 1970s era Peugeot ten-speed bicycle, I began an inventory of those few items I’d acquired long ago and still own.

In the 1960s, and for decades before that, the Fuller Brush man called on homes selling push brooms, potato whisks and all manner of items with bristles.  Monthly, he’d call on ours.  As a six- or seven-year-old, I’d long admired Dad’s tortoise shell Fuller branded hairbrush that was stowed in a drawer in his bureau.  Some days, when he was at work, I’d steal the thing for a moment and run it through my cowlicky, red hair. 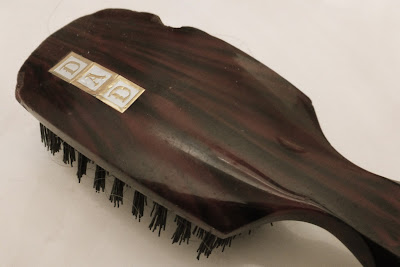 Then one Christmas, early in that decade, one showed up for me: with my initials on it!

As a fourth grader in nasty old Mrs. Smith’s class, I became really interested in California history: two things in particular: the Gold Rush and the building of the transcontinental railroad.  Still shelved is my copy of Remi Nadeau’s Ghost Towns and Mining Camps of California which I used to pour over and plan trips if I ever became old enough to drive... 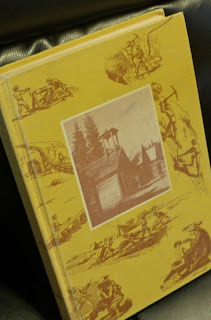 ...and my copy of the first hard cover book I ever purchased: Oscar Lewis’s The Big Four.  Mom was a bit nonplussed that I would spend $4.95 on a book let alone one I’d probably never read, but read it I did. 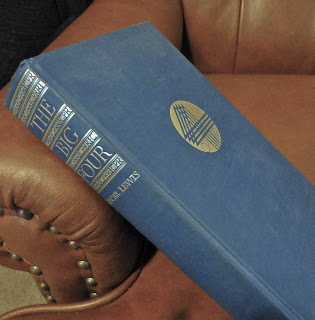 And when I, myself, spent seven years teaching fourth grade, both Nadeau’s volume and Lewis’s epic informed much of the history instruction I was able to provide.  I wonder if any of my little charges ever caught the gold bug or the train bug.

In 1970, for about 1800 bucks, I purchased my first car.  I’d always wanted an MG, but if any came available, they were always more than I could afford.  One day, a yellow 1967 Triumph Spitfire showed up on a Park Avenue used car lot.  Vowing to maintain it myself, on my way home from purchase, I stopped by Collier Hardware and picked up an expensive set of SK Wayne metric sockets. 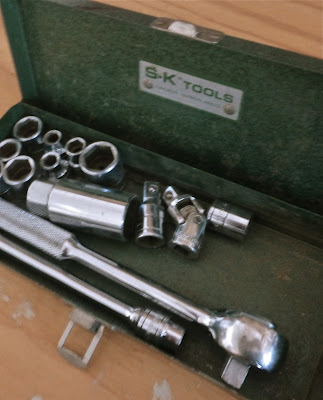 I kept the yellow Spitfire about four months.  The socket set is still in my garage.  Never used it on that car.

At some point, early in my college years, my five-speed Raleigh bicycle got left out for an extended period of time and the rear hub gave up the ghost.  Too stupid to realize that repairing or replacing the hub was a simple task, especially if one had a set of SK sockets, I traded the old bike in for what, at the time, was supposedly the fastest bike available: a black Peugeot ten speed with dropped handlebars and Simplex Prestige gears.  I rode the thing to and from campus and around Bidwell Park until I moved to a more mountainous region where the roads were less welcoming and a mountain bike seemed more in order.  The ten-speed rested in a barn outside Chico for a couple of decades.  Fifteen years ago, I rescued it and it sat idle in my garage until our most recent move to a more bicycle-friendly community (read: fewer hills). 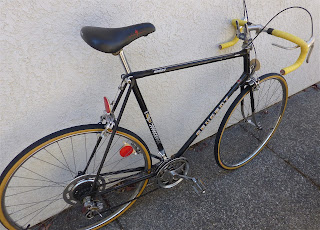 A while back, when purchasing a new bicycle for my wife, I rode the Peugeot to our town’s only dealer who exclaimed:  “I used to sell those!  Those were the fastest bikes around!”

My Estwing hammer dates back to when I was building a shop out back of a house I’d owned in Chico.  You can buy the same hammer new today, but a new one would lack the patina and the history of mine: the shop, two sheds, fence repairs, school projects, roofing, more fence repairs, dog houses, decks, fence repairs.

Hanging near the hammer is a substantial collection of relatively old tools, tools I acquired because I was engaged in some successful project or other. 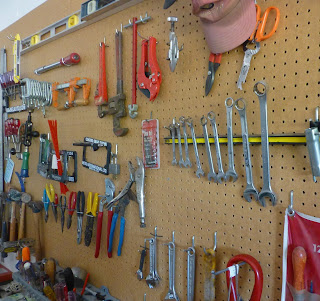 And the definition of a successful project is something you’re working on that requires a trip to the hardware store in order to buy a new tool.

As a seventh grader, Charlie Van B, the Junior High band director, took one look at my overbite and suggested that, in part to correct that, I should learn to play the tuba.  The big round mouthpiece might help to push those bucky, upper teeth back into the normal range, he reasoned.  (Actually, he just needed a kid to play tuba, but no matter.)  I helped support the bottom of the band and the area youth symphony for six years, playing a big brass bass of one sort or another into college for a couple of semesters.  Then, the need for a job took away my ability to invest six hours weekly for only one unit of college credit.

A few years later, my wonderful sister-in-law, a successful music major, found herself teaching band at my old Junior High.  Up on a shelf in a dusty corner of the instrument room lay a derelict Pan American e-flat tuba, destined to be shipped off for salvage.  Somehow checking records, she found that she knew the kid who learned on this ancient axe back in 1967. Now a noteworthy source of entertainment for my five-year-old grandson, it remains one of the most thoughtful Christmas presents I’ve ever received.

Rooting around through the house and garage, I found quite a few things that I’m too stubborn to be rid of:  A canoe paddle from my preteen days,

Dad’s spyglass that could never be held steady enough to actually see the moon’s craters, 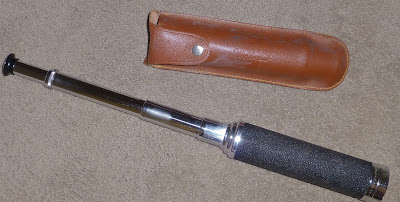 A Bach mouthpiece from a different tuba, 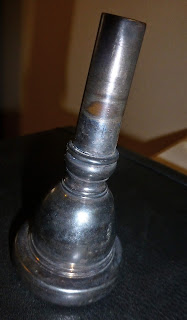 The post hole digger - Did I mention fence repairs? 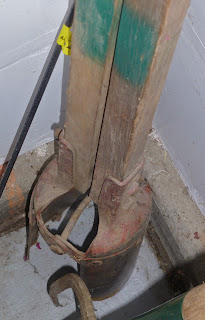 The manuscript of Dad's novel - unopened. 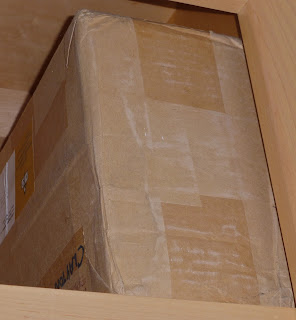 Still, as life has evolved, I’ve off-loaded many items that may or may not have any value beyond simple nostalgia: 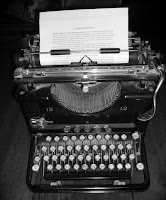 *  The Remington Standard typewriter, circa 1914, that I’d purchased while working a televised fund raising auction - it was up for bid and I needed something for term papers.  I was certain it would do;
*  The convertible oak typing desk built in the Chico State shops back in the thirties - a yard sale find and my first refinishing project;
*  My first (and second) Honda Trail 90 - there are still several running around, but mine are both gone;
*  My Kelty pack from 1965…

I regret the losses, foolishly, I suppose, but wonder, in our culture of consumption and plastic discardables and next-newer-and-better, what items might be procured today that will still be of value when that aforementioned grandson turns sixty.

THIS PLACE I KNOW: a book recommendation

One of the darkest things a school principal must confront is the death of a student or the death of a student’s parent.  You can’t shake the fact that such tragedies put all that we do on a daily basis into a painful perspective.  Our education, our training – and almost always our words – fail us. 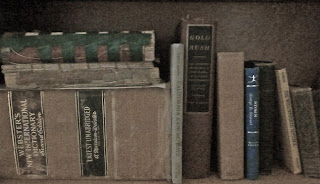 Shortly after the events of September 11th, 2001, Georgia Heard collected a dozen and a half children’s poems and worked with a similar number of children’s book illustrators to create a delightfully moving little collection called This Place I Know.  Her intent was to provide words of comfort to the children who lost so much on that tragic day.

I somehow stumbled across the book and purchased a personal copy.  Shortly thereafter, I received a call through my superintendent that the father of one of my students needed to see him for an important matter.  Could it wait until recess?  No.  It seems his mother was on a cruise ship vacation and, with handbag or purse missing, her body was found at the foot of a flight of stairs.  Dad needed to deliver the news.  He did so in the parking lot about fifty feet from my office door.  The boy crumpled as I watched helplessly.

That evening, I went home and reread my favorite poem from This Place I Know.  Then I read them all.  Within the week, I dropped by the student’s house and gave him the book.

Over the course of several years, I found myself giving copies to many kids, and in the case of students taken from us, to many classroom libraries.

I’ve been out of the business for six years now, but the import of that tiny volume lingers. 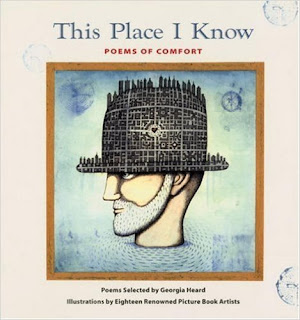 A couple of weeks ago, the headline in the Santa Rosa Press Democrat screamed: “Two children die after truck plunges into river.”  The elder child had just started second grade at a small, coastal school housing about 100 students K through 8. It's nearby.

I thought of the family, the teacher and the school principal and sought my volume of This Place I Know.  I needed to pass it forward.