RELIVING HISTORY ON THE RAILS

A visit to the Western Pacific Railroad Museum
in Portola, Plumas County, California

The Western Pacific Railroad was organized on March 3, 1903.  The first spike was hammered in 1906.  On November 1, 1909, the last spike was driven on a steel bridge over Spanish Creek near Keddie, California.

The WP became the all-weather transcontinental route cresting the Sierra at Beckwourth Summit some 2,000 feet in elevation lower than the Donner Summit Route chosen by the Central Pacific some forty years before.  According to Norman W Holmes in his book “My Western Pacific Railroad,” it is the route the Union Pacific would have selected as they built their line west had not the Big Four and construction engineer Theodore Judah chosen the Donner Route out of Sacramento for the CP. 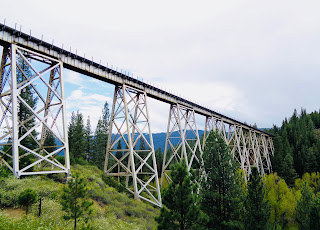 Today, tracing the historic line of the WP along California’s State Route 70 offers the rider (driver) a spectacular journey up the Feather River Canyon – complete with granite cornices, tumbling water, picturesque trestles – out across glorious high-country meadows and pristine pine forests, and into the subtly beautiful Basin and Range.  From Belden to Blairsden (great pizza place in Blairsden) the route is dotted with quaint villages and towns.  If you haven’t driven Highway 70, do so.

And along the way, be absolutely sure to visit the Western Pacific Railroad Museum (WPRM) in Portola.  The museum is maintained by the Feather River Rail Society for the express purpose of keeping alive the history of the ol’ WP.

Here are a few shots of what you’ll find: 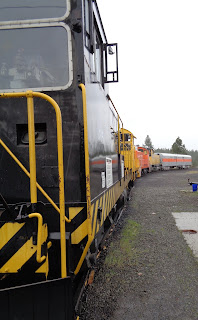 Volunteers have collected aging rolling stock some of which dates back nearly 100 years. 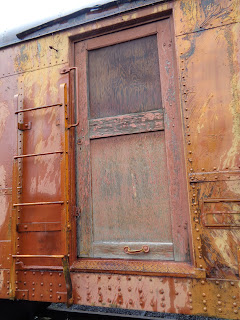 What cargo may have passed through this door? 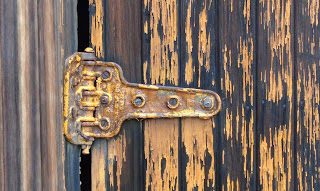 How many times did this hinge squeak open?

The collection of diesel locomotives is beyond expansive.  Many hold the fading livery of one of the WPs four paint schemes.  Others represent lines the WP purchased during its heyday like this Sacramento Northern road switcher. 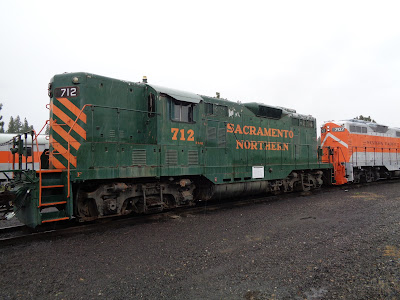 I recall watching this very engine roll up Main Street in Chico when I was a kid (often colliding with automobiles driven by motorists who mistakenly thought a 100 tons of locomotive and freight could stop any time soon.) 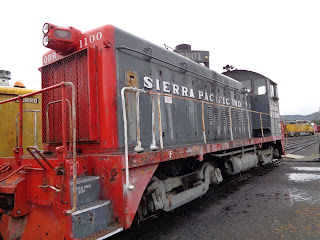 … but a close up look at the aging paint reveals that there is likely a bit more to its history. 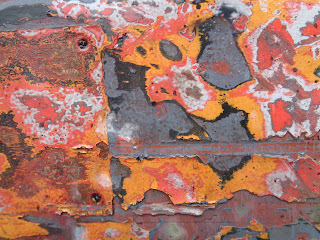 Looks sorta like an interesting quilt square, now doesn't it? 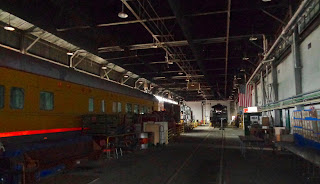 Although the grade was only 1.2 percent or less, the WP used their Portola yards as a point where extra motive power was released after the pull up the canyon from Oroville.  A shop was built here early on but abandoned when maintenance operations were consolidated to Stockton.  Decaying with busted out windows and without power, the building came into the hands of the non-profit.

Here, the volunteers have established displays including road signs… 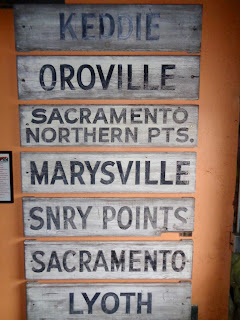 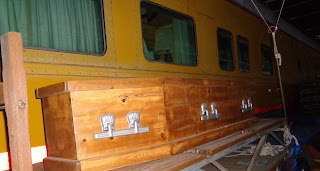 They also use the shop as, well, a shop.  Currently, a steam locomotive is undergoing restoration.

Staffed mainly by volunteers, one gentleman we spoke with gave new meaning to the term “Postman’s Holiday.” A three-trip-per-week engineer on the UP line from Sparks to Elko, he lives locally and spends his weekends and vacations working on the antique equipment and visiting with wayfarers ensuring that the history of the WP is not lost.

Back out in the yard, this monster caught my attention… 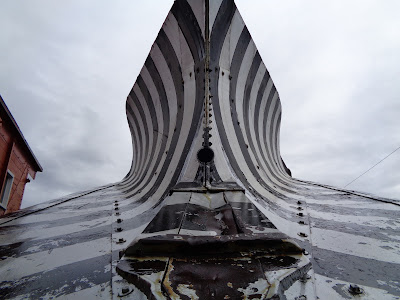 …as did this remnant of the California Zephyr, the supremely elegant passenger service that, having earlier left Oakland, CA, snaked up the Feather River Canyon on its way to Salt Lake and beyond. 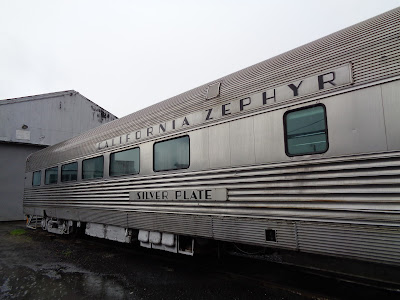 I remember Dad driving us up the canyon simply so we could get a glistening glimpse at the Zephyr, always thinking, if only…

But my visit to the museum was about to get better.

Behind the old shop, we hear this electro-motive diesel freight unit roar to life.  A cloud of exhaust that, normally, one might avoid, this day smelled like a slice of heaven from by-gone days. 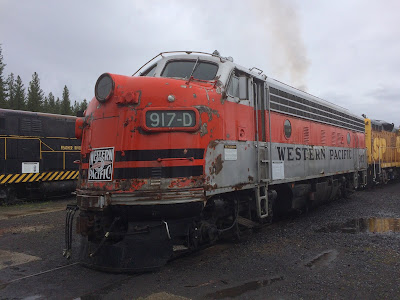 Inside, Charles, a retired steam-fitter is ensuring that all the controls – forward drive, neutral, reverse; brake lever, air horn (two longs, a short and a long when approaching a grade crossing), the bell switch, the forward light and the rear – are operating. 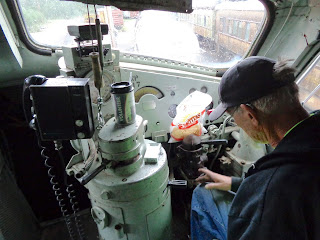 Then he motions me to the engineer’s seat, points down the line and says “Give ‘er two short blasts on the horn and start movin’ forward.” 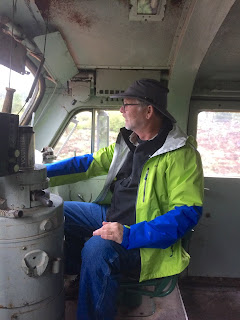 If only happened.  I’m still giddy about it. 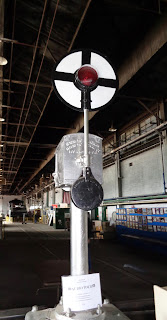 The Feather River Rail Society, curators of the Western Pacific Railroad Museum, is a valuable resource worthy of our support.  Here’s their link to our digitalized present: www.WPLives.org

My Western Pacific Railroad, Norman W Holmes (Feather River Route engineer) Steel Rails West Publishing, 1996.  This volume contains a concise history of the WP.  The historic photos are fun – as are all old railroad photos to me.  The perspective of the author – a guy who actually ran the route – is unique in the world of rail fan publications.