IS THIS HEAVEN? NO. THIS IS CAMP SHERMAN, OREGON.

When previously visiting the area with our wives, the Metolius River Resort’s cabins proved to be quite comfortable, spacious and well appointed: http://www.metoliusriverresort.com/index.asp

The local restaurant wasn’t open for breakfast, and we didn’t pack for that, so we started each day trip with a run into Sisters where there are several nice breakfast places.

The Sisters Oregon Guide has this to say about Camp Sherman: http://www.sistersoregonguide.com/recreation-camp-sherman.html

Day 4 of the Volcanic Legacy Tour
of California and Oregon 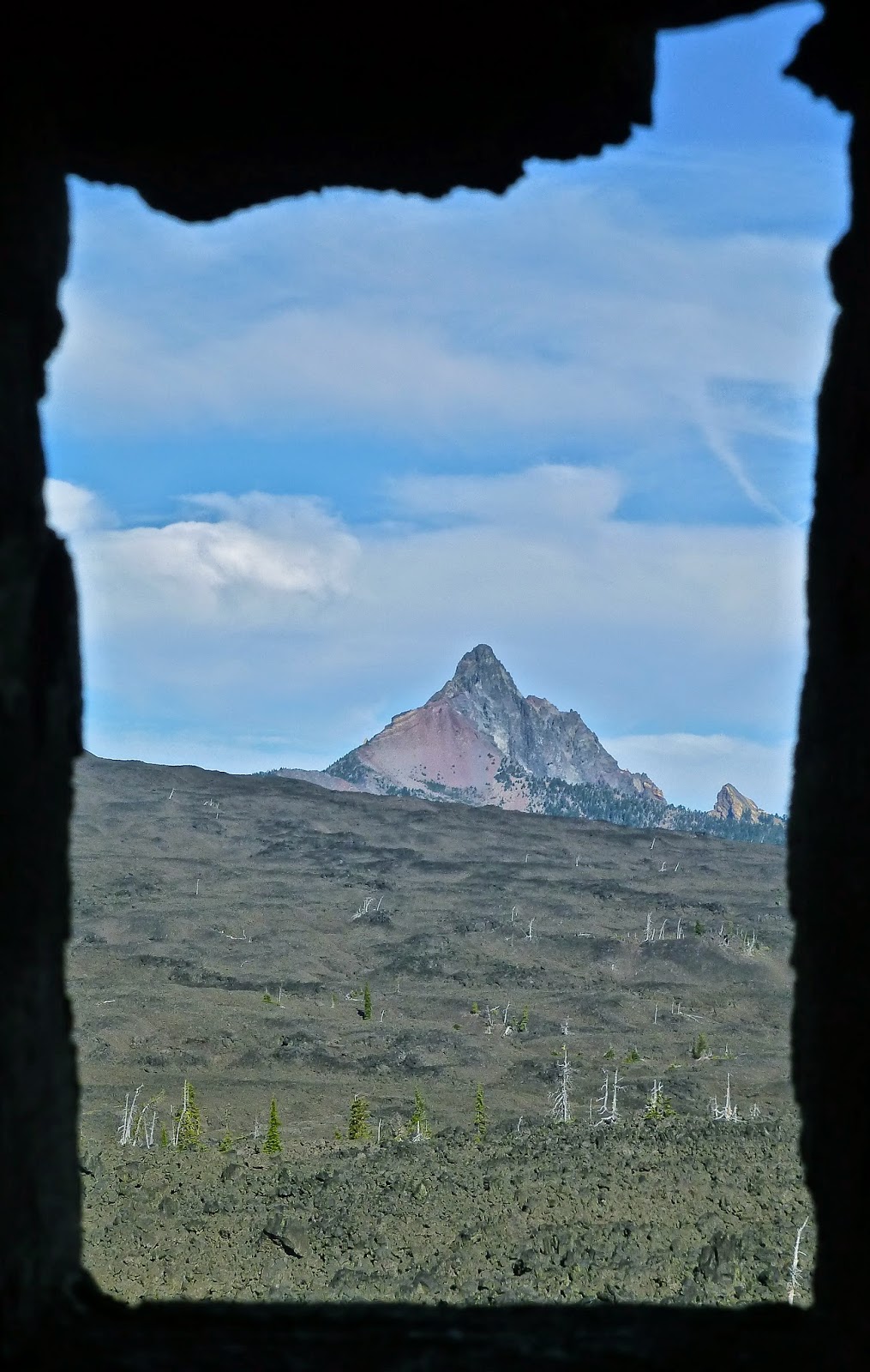 A good plan on this tour was to home base in some lovely place engaging in day trips from that central point.  Today’s sojourn would see us again “scratching God’s belly,” this time from a rugged Cascade moonscape called McKenzie Pass. 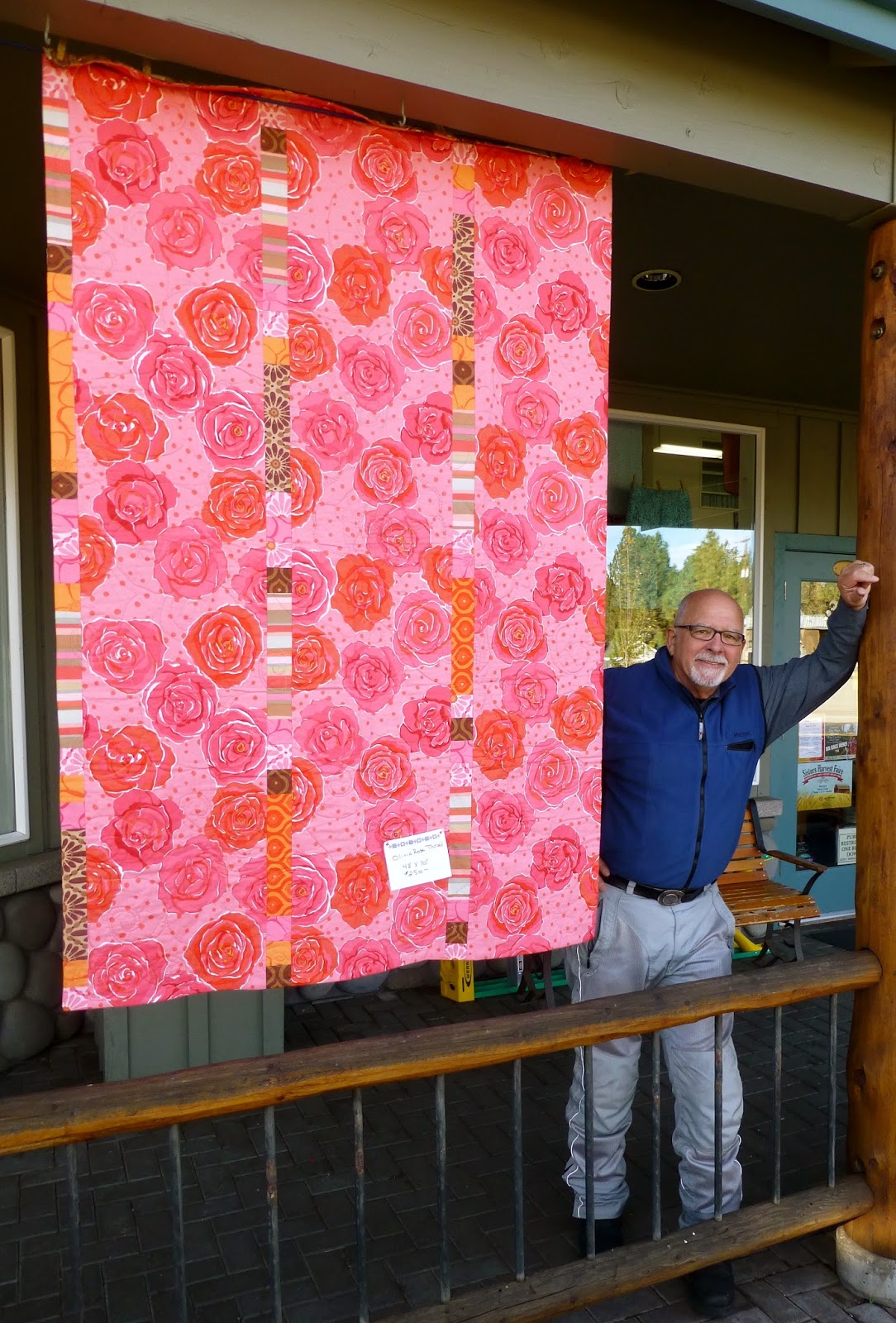 Oregon’s highway 242 twists from Sisters, the quilting capitol, fifteen miles to the summit.  Continuing on, the route descends to the McKenzie River Highway.  The pavement provides about 40 miles of challenging ride and out-of-this-world scenery.

The eastern face of the Cascades is home to vast reaches of yellow and Ponderosa pine.  The trees are generously spaced and the forest floor nicely groomed.  Little light filters through the canopy so the sage is sparse at best.  A few miles west of Sisters, an inviting sign warns travelers that vehicles longer than 35 feet in combination are prohibited.  Yippie-ky-yo!

We corkscrew up and through the range of climatic zones moving from thick forests to an environment almost completely bare.  But not because of elevation.  The summit is well below any established timberline at this latitude.

What we come upon is what we would image the surface of the moon looks like, had we not, now, possessed second-hand knowledge of that sphere.  Rocky.  Rough.  Rugged.  Inhospitable.  Perhaps impassable?

Most certainly snow falls at this elevation but no streams course down the mountain.  Instead, the mantle of snow, sometimes twenty-feet thick, simply stays in place until the spring thaw when it melts and slips through the random chunks of basalt into pumice and grit and ancient, long-buried-by-volcanic-activity forest litter.  Trickling, drops at a time, the snowmelt descends a few thousand feet into a large underground lake.  The journey takes years. 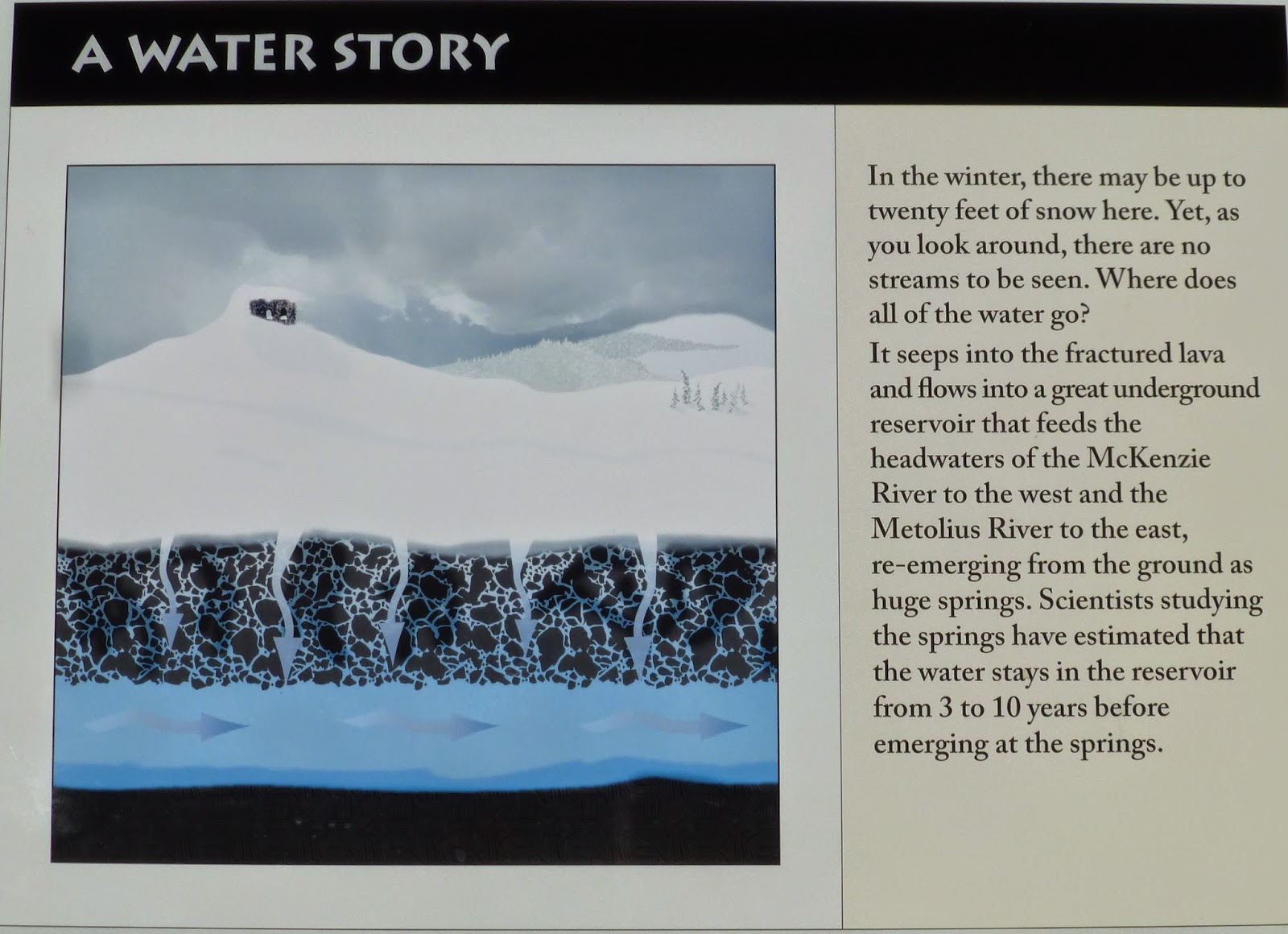 Back down at Camp Sherman, a mile or so from our rented cabin, spillage from this lake springs from beneath a mossy rock outcrop.  It appears as the fully flowing Metoluis River.  Musically, night and day, it slips past our home base.

Over on the west side of the summit, the McKenzie River is formed the same way. 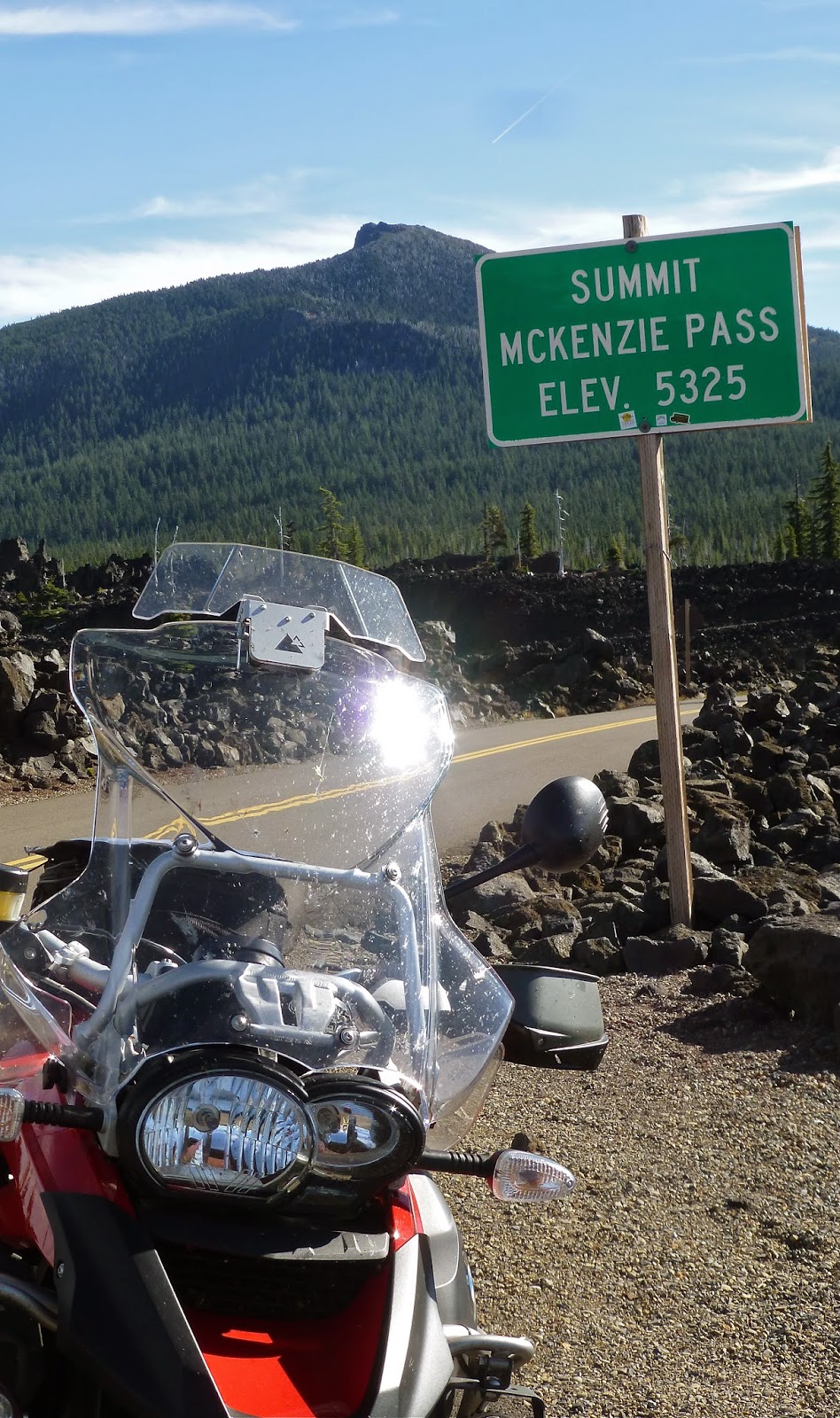 Back at the summit, the Forest Service maintains and observatory named for one of their pioneering rangers, Dee Wright. 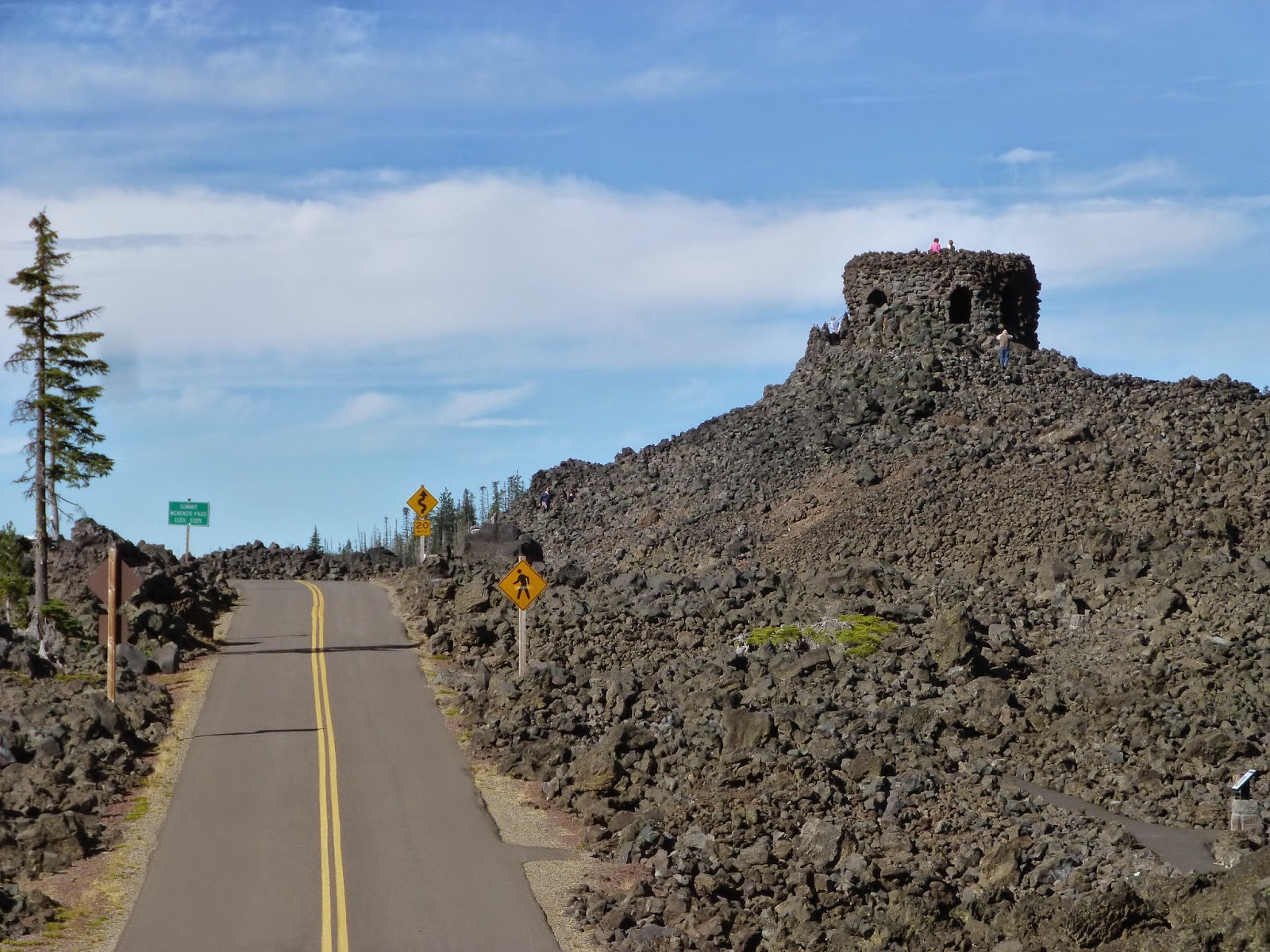 Through its portals one views the ice carved arêtes of Mounts Washington and Jefferson and the Three Sisters. 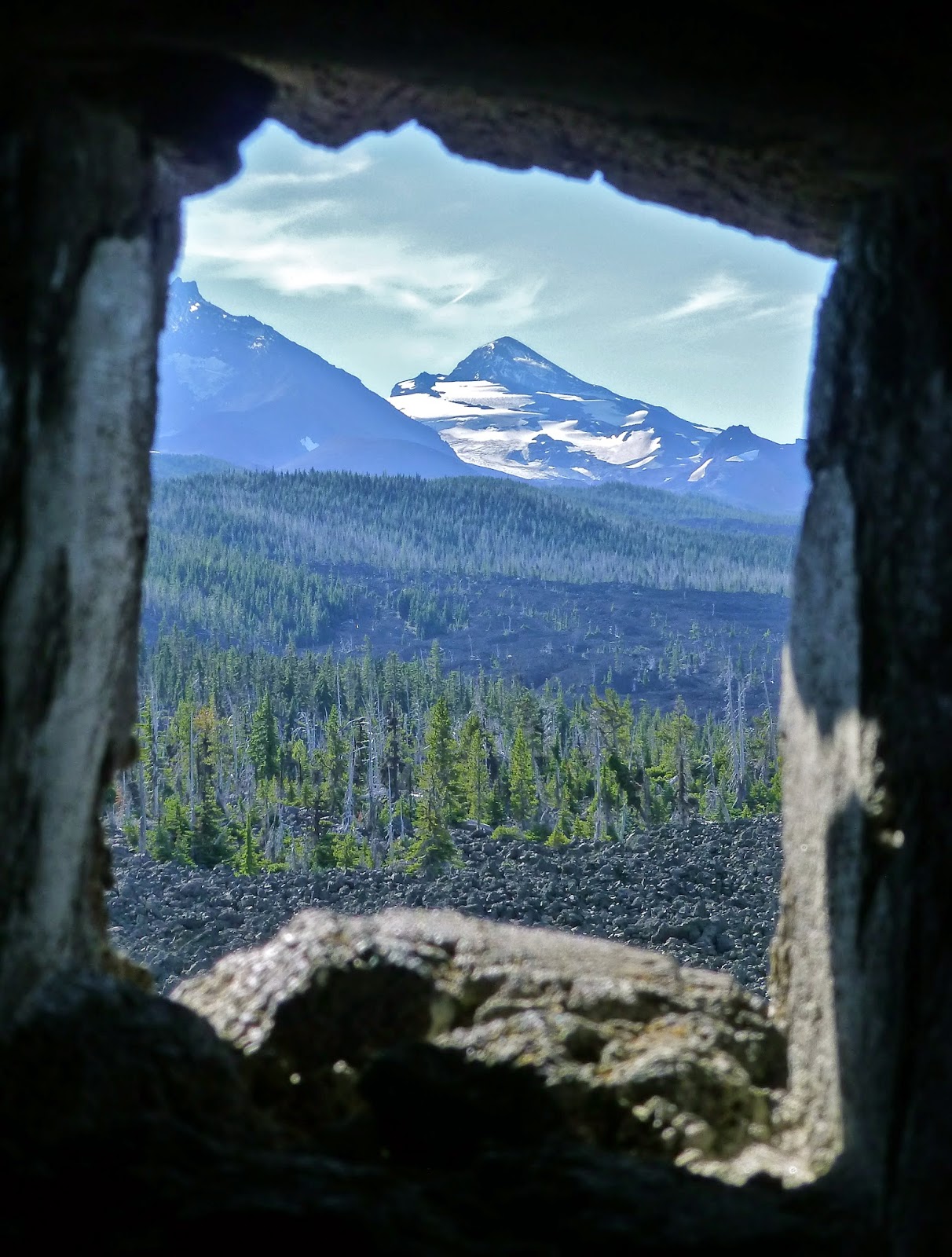 Much of the volcanism in this area preceded the last ice age.

But slightly off to the north-northwest rests Belknap Crater, a rounded cindery dome not yet carved.  Its ice age waits.

A paved trail leads the saddle-sore among us on a twenty-minute interpretive walk. 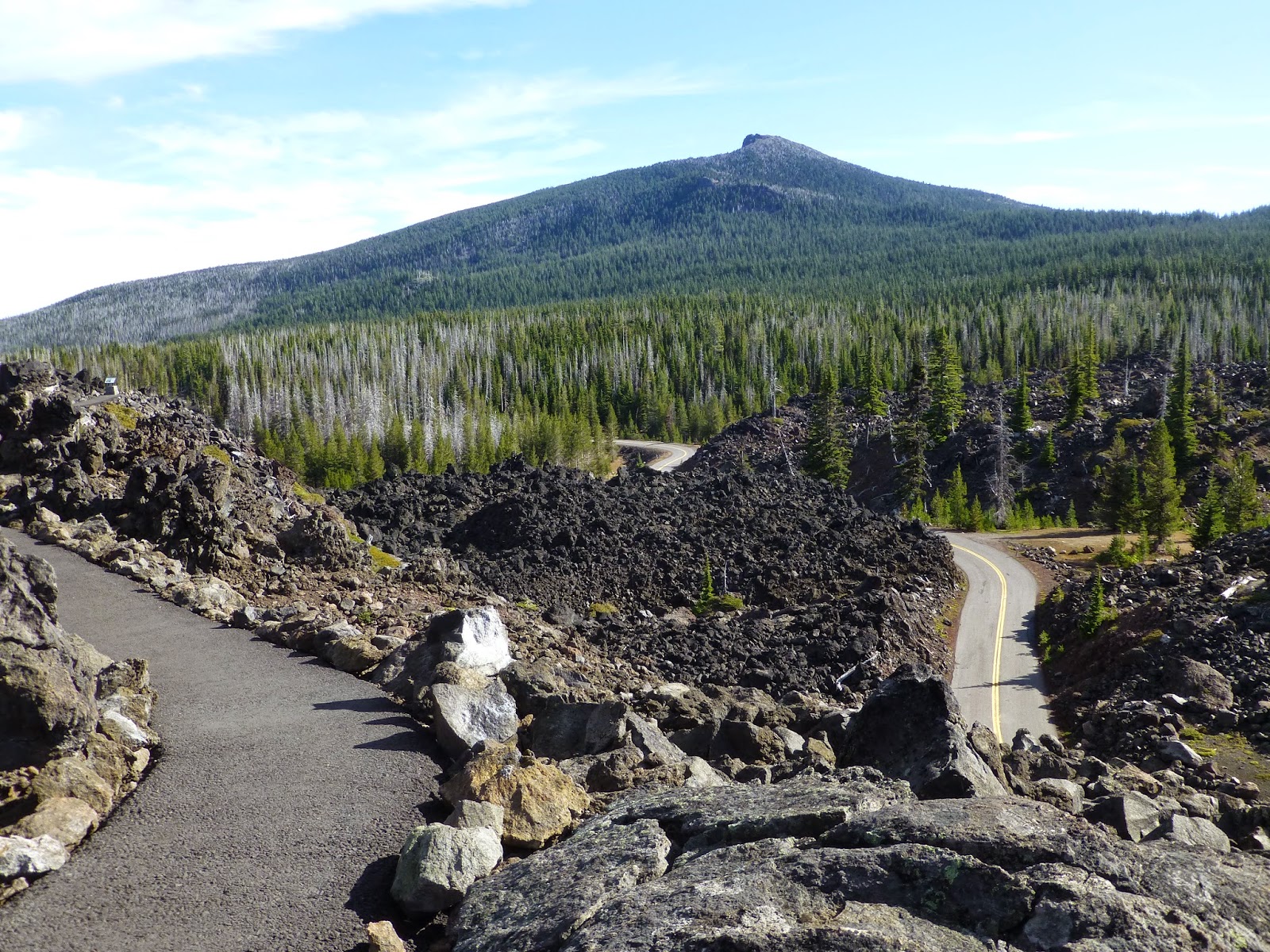 Well-placed signs tell a story that both amazes and sizes one with his or her place in the world. 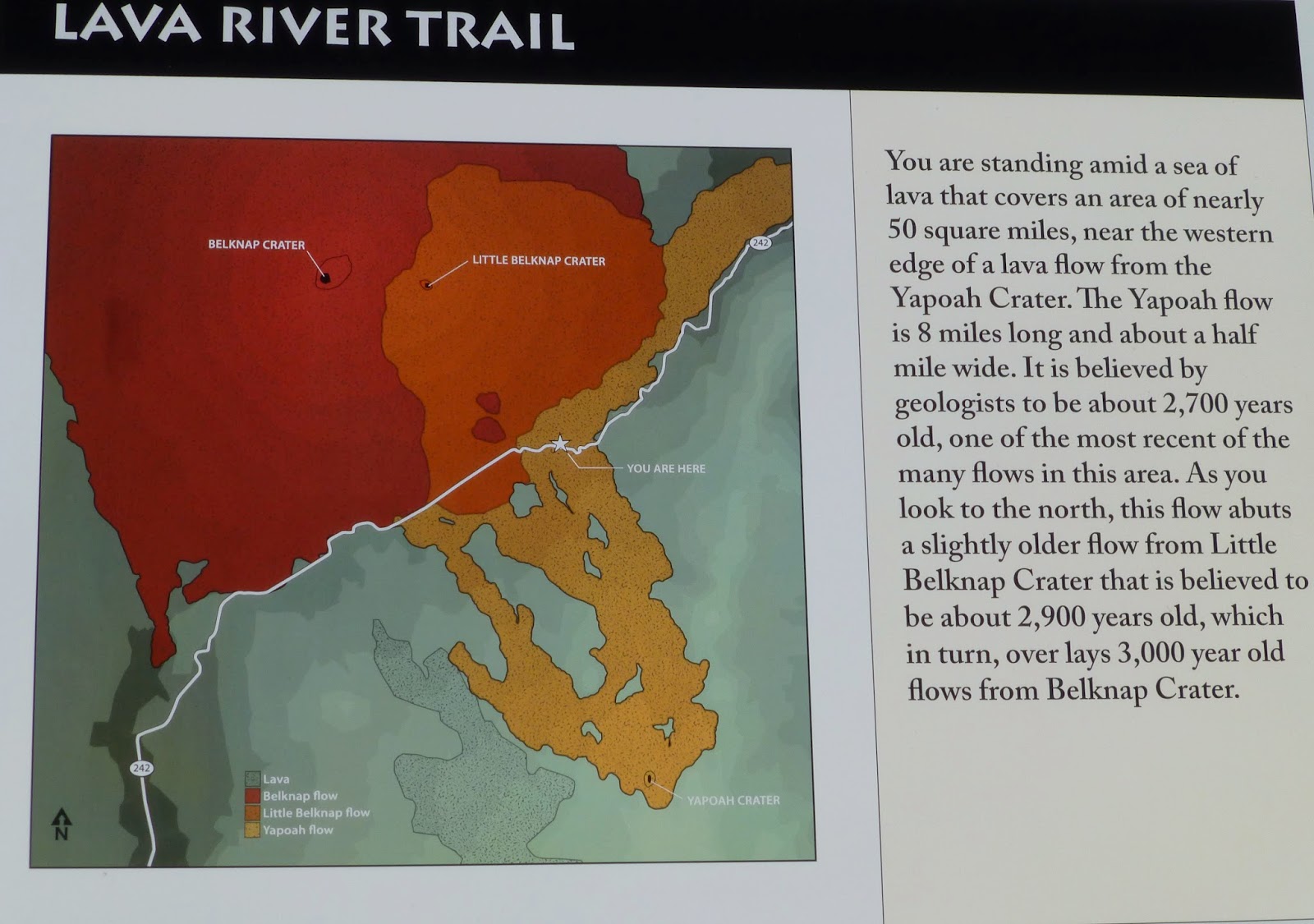 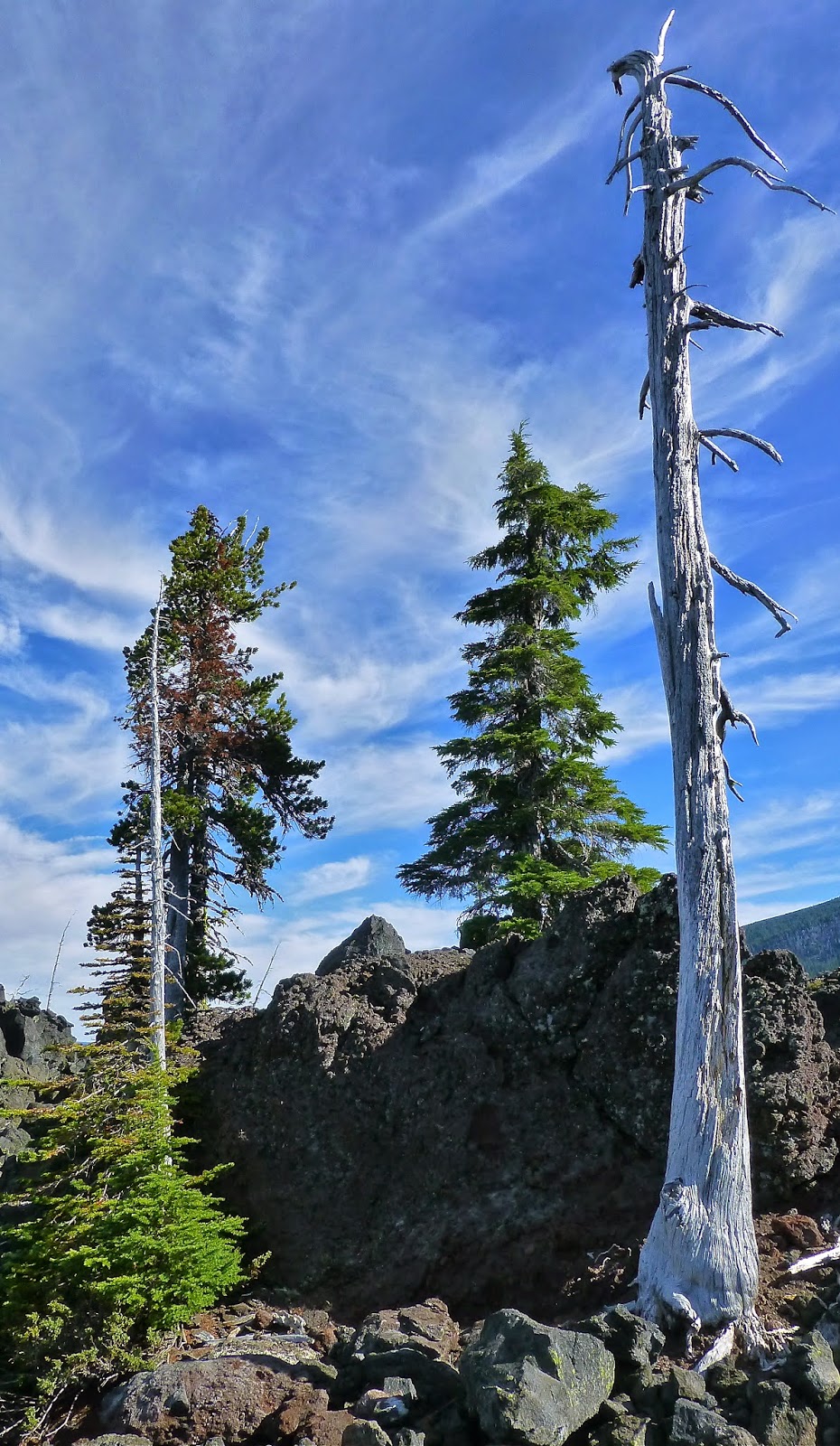 I look over the lava jumble and am moved by the expanse of time, the dynamics of an ever-changing earth and the effort those with wagons or pushcarts expended in order to reach the Willamette Valley.  So very near by now, but, ever so far.  How many of today’s citizen would be so motivated, so driven, so tough?  Probably not me…

Shortly after leaving the summit, we find ourselves winging around sweeping bends into a thicker, more moist forestscape.  Frost had kissed some of the broadleafs already making the ride a kaleidoscope of movement and color.

At the junction with the McKenzie River Highway, we route ourselves north and east over Santiam Pass and back home to Camp Sherman.  This proved to be a most pleasant 100-mile full day. 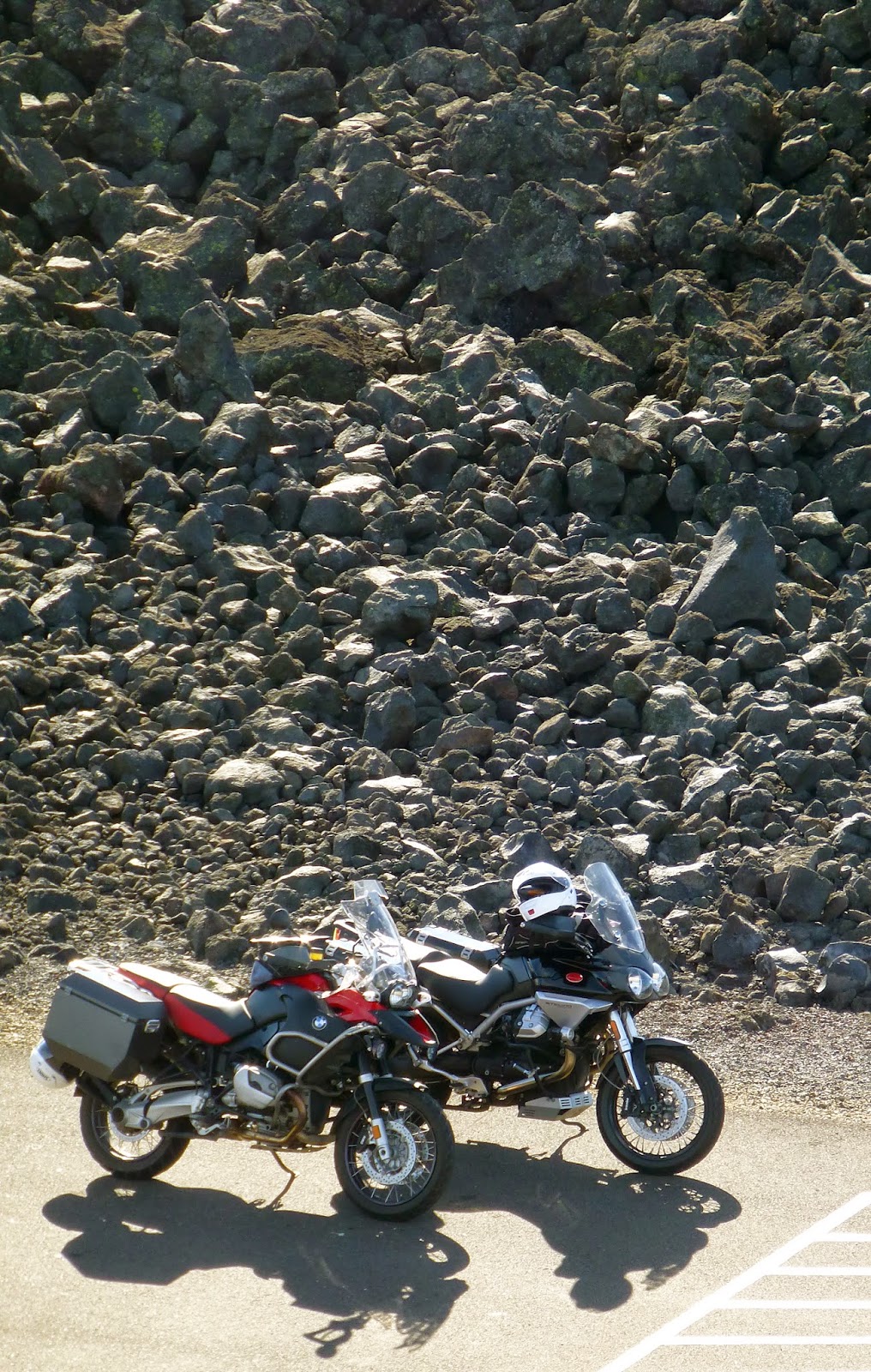 Today’s Route:  Northwest of Bend Oregon on US 20, find Sisters and nearby Camp Sherman.  Our day started on the banks of the Metolius in Camp Sherman.  Follow Camp Sherman Road south to OR 126/US 20.  East to Sisters.  West on OR 242 over McKenzie Pass to rejoin OR 126.  North on 126 (it connects with US 20 up the road a piece), then east to Camp Sherman Road.